The Plusnet Hub One router is quite good hardware but the official firmware restricts what you can do. For example, you can’t setup a VPN or monitor traffic. This tutorial will show you how to flash the device with OpenWrt Version 21.02 so that you can get the most out of the device.

Flashing the Plusnet Hub One Router with OpenWrt is done by connecting a computer to the router over a serial communication. However, the router doesn’t have a serial port and requires wires soldered to the circuit board.

I used this Soldering Iron Kit* and this USB to Serial TTL Dongle* to connect my MacBook Pro to the router.

You also need a USB Flash Drive* to store the OpenWrt Firmware on. This drive is connected to the router during the installation process and it’s also used to backup the existing stock firmware.

Depending on what operating system you are using, you will need to install a terminal emulation program that supports serial communication. Since I’m using a MacBook Pro, this guide uses picocom which can be installed with homebrew.

Once you’ve downloaded the OpenWrt Firmware, copy it onto a FAT32 or exFAT formatted USB Flash Drive* and plug it into the USB port of the router.

The steps in this tutorial can potentially brick your router and make it unusable. Use them at your own risk and make sure you have a spare router to use if it fails.

The first thing we need to do is open the case. It’s held together with clips and there are no screws. Read the following tutorial to learn where the clips are and how to open the case without damaging them.

How to Open the Plusnet Case.

Step 2: Solder Wires to Circuit Board

The next thing we need to do is locate the solder pads for the serial port GND, TX and RX connections and solder wires to them. We also need to locate the boot selector (BOOT_SEL) pad and either solder a wire to it or touch a wire onto it while powering on the router.

The image below shows the locations of the pads. 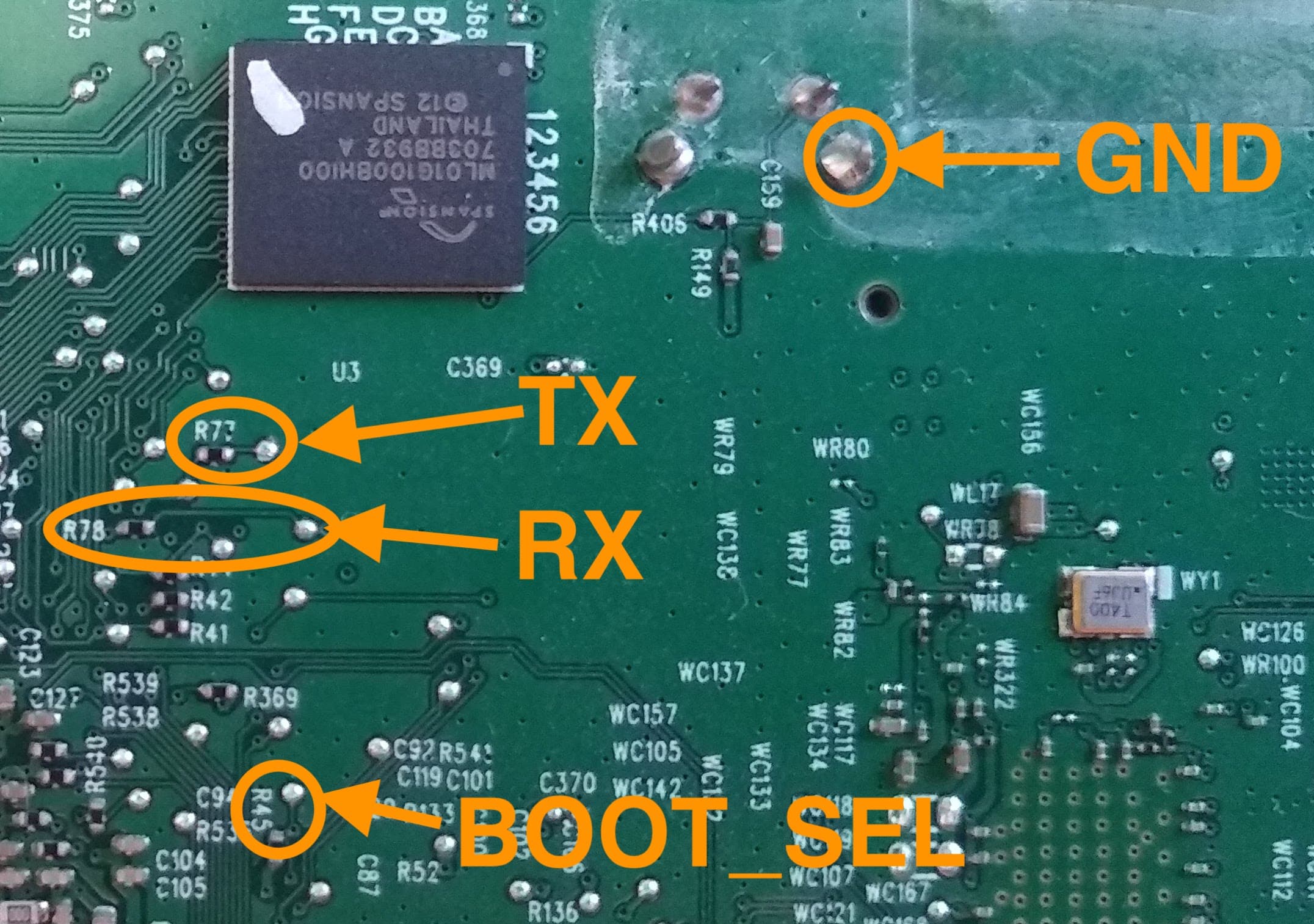 Now we need to solder wires to them. In the image below, I’ve soldered wires to all the pads but it might be better not to solder the BOOT_SEL wire to the board. The reason for this, is because some people have experienced routers getting stuck in boot CFG mode, which might be caused by too much heat or damage to the resistor. Once you’ve soldered the wires, strip the ends and connect them to the USB to Serial TTL Dongle*. The TX on the router goes to the RX on the dongle. Now you need to setup a TFTP Server on your network and configure the IP address as 192.169.1.2. Since I’m using a Mac that has a built in TFTP server, I assigned a static IP of 192.169.1.2 and enabled the server with the following commands.

Copy the BTHOMEHUBV5A install Image to the root of the server. In my case that is /private/tftpboot.

Connect the router to the TFTP server either directly or via a switch on your network and then we can boot the install image over the network.

At a terminal run the following command to initiate a serial connection.

The address of the TTL dongle will be different for you, depending on what machine you are using to connect. On Linux it’s probably /dev/ttyUSB0.

Once you’re connected to the serial port, we are ready to power on the router. Before press the power button, you need to connect the BOOT_SEL wire to GND then immediately release it after powering on the device.

If you connected successfully, you should see CFG 04 in the terminal output.

Open a new Terminal and run the following command to boot the custom U-boot loader.

Once the U-boot loader has loaded, you should be able to run commands in the original terminal window. The command we need to run is the tftpboot command. This will download the install image from the TFTP server, which contains the utilities required flash the firmware.

Run the following command to start boot the install image.

Note: by default the IP address of the router is 192.168.1.1 and this might already be in use on your network. You can change the router IP by running.

Then changing the address.

Make sure the USB Flash Drive is plugged onto the router then run the following commands to mount it.

Once the USB Flash Drive is mounted, run the following command to backup the existing firmware.

Wait for the data to be copied. This will take quite a while so go and make a drink and be patient for the command to finish.

Run the prepare command to start the flashing process.

Type in YESIHAVEABACKUP then press Return.

Choose device type a for BT and b for Plusnet.

Now run the following command to flash the firmware.

Wait for the install process to finish and the router to reboot into CFG 04 mode. Once more power cycle and it should boot into the OpenWrt system.

That’s it, you can now disconnect the serial port wires, tape them up and tidy them neatly inside the router before putting the case back on. You can now configure the router how you see fit. For much more details, read this OpenWrt Installation and Configuration Guide.

In this tutorial, you learned how to flash the Plusnet Hub One Router with OpenWrt Version 21.02. You can now do things like:

And pretty much anything you can do with Linux.